Juan Soto is 20 years old. He swept through the Nationals farm system going from Rookie League to Class A in 2017 and Class A to the Majors by May of 2018.

Let that sink in… Class A to the Majors by May! The season only starts in April! That trajectory is unprecedented in itself, but a story for another day.

Soto is wrapping up his first full season of MLB level action and he is quietly RAKING. Consequently, the Nats have been one of the best teams in baseball (after starting 19-31) fighting all the way back to a multiple game lead on the top NL Wild Card spot. Soto has been a big reason why. Since game 51, back in May, Soto is slashing .310/.420/.619 with a 161 wRC+. For reference, NL MVP frontrunner Cody Bellinger has a season slash of .306/.410/.642 with a 165 wRC+. Really.

Nerd’s side note, continue at your own risk: wRC+ is my favorite baseball stat. It’s all encompassing and easy to interpret. 100 is league average so 150 would be 50% above league average while 82 would be 18% below. Per Fangraphs, wRC+ is a rate statistic which attempts to credit a hitter for the value of each outcome (single, double, etc) rather than treating all hits or times on base equally, while also controlling for park effects and the current run environment.

The more you know… Back to the meat.

Mel Ott is a 12-time All-Star and Hall of Famer. Tony Conigliaro got hurt in his age 22 season and flamed out of the big leagues by the time he was 30. So whatever. By that math 50/50 shot Soto already has his best days behind him. Right? Not actually.

Forgive me for believing in Soto to continue to develop along the Ott, Griffey, Rodriguez and Bonds career paths more similarly than that of Conigliaro.

The craziest thing about Soto and his rapid ascent is that before making it to the bigs, he wasn’t being looked at as the games next power superstar. His 55 raw power scouting grade was only slightly above average, yet has clearly developed. He was, however, touted for having great control of the strike zone and plate discipline. These skills are not only highly coveted and rare in today’s game, but even more so amongst the youngest generation of players. And they’ve proven as good as advertised thus far.

When I think of pate discipline a few names come to mind from the last decade or so of my serious baseball fandom. Trout, Freeman, Zobrist, McCutchen and shout out Bobby Abreu while we’re at it. That being said, Joey Votto is the gold standard as far as I’m concerned. He’s led the league in walk rate five of the last seven years without finishing worse than fourth over that stretch. Naturally I wanted to see how Soto stacked up to Votto.

In his first two partial seasons in the league Soto has a 15.5% walk rate. In years Votto was at the top of the walk leaderboards, he was in the 17-20% range. It took him a while to develop that patience though. It wasn’t until his 5th season in the bigs that he cracked >15% walk rate. Soto is on pace to do so each of his first two years.

Taking walks alone is good, but another piece of controlling the strike zone is consequently not striking out. Let’s dig in on K%-BB%. Its calculated as simply as it appears, strikeout percentage minus walk percentage. This difference is a great way to proportionally compare the two plate discipline outcomes.

The first five years of Votto’s career his K%-BB% trended steadily in the right direction (see right image). Beginning in 2012, when he began leading the league in walk rate year over year, this statistic leveled out to a league leading degree hovering around 0%. Votto was the most disciplined hitter in baseball his age 28-34 season taking just as many, if not more, walks than strikeouts. Incredible numbers through his prime though you can see it took him a number of years to develop this world class patience. 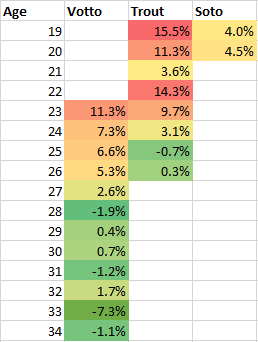 For reference sake I’ve also included Mike Trout’s progression into consideration. Again, taking a bit of time to develop into the hitter he is today but here we are just having entered Trout’s prime.

You can see Soto has not had a huge delta year one over year two but let’s dig in on those numbers. If you look at his first calendar year (original call up in May 2018 thru game 50 of 2019) Soto had a K%-BB% of 6.1%. Better than the first years of Votto or Trout, but not necessarily world beating. From game 51 on (consequentially the date noted above that the Nats started winning), Soto is at 1.0%. That’s a prime Votto/Trout number in his age 20 season. Good lord.

Luckily for baseball, the game is full of young stars. Ronald Acuna Jr. (21) has a legitimate shot to join the 40 40 club this season. Alex Bregman (25) is already a World Series champion and is putting together a second straight year with 30+ homers and more walks than strikeouts. Cody Bellinger (24) is your likely 2019 NL MVP when all is set and done and has really cut down his strikeout numbers from his first two years in the league. Vladimir Guerrero Jr. (20) has shown flashes of brilliance in his first few months of pro level ball including the circus that was his performance in the 2019 Home Run Derby. The Derby winner, Pete Alonso (24) is currently leading the Major League Home Run race as a rookie. Fernado Tatis Jr. (20) was putting together a sure-fire NL Rookie of the Year campaign before a season derailing back injury – and he’ll still contend for the award even having only played 84 games.

A lot of really impressive young players. Yet you don’t hear the universal praise for Soto that many of these other names have gotten and continue to get. He deserves it. And even if he doesn’t get it right now, he’ll be forcing that issue of soon enough.

For the record, if I’m picking one player to ride with over the next decade, I have the most confidence in the staying power of Soto’s game. The skillset will always translate and by 2030 he’ll be right in the heart of his prime.